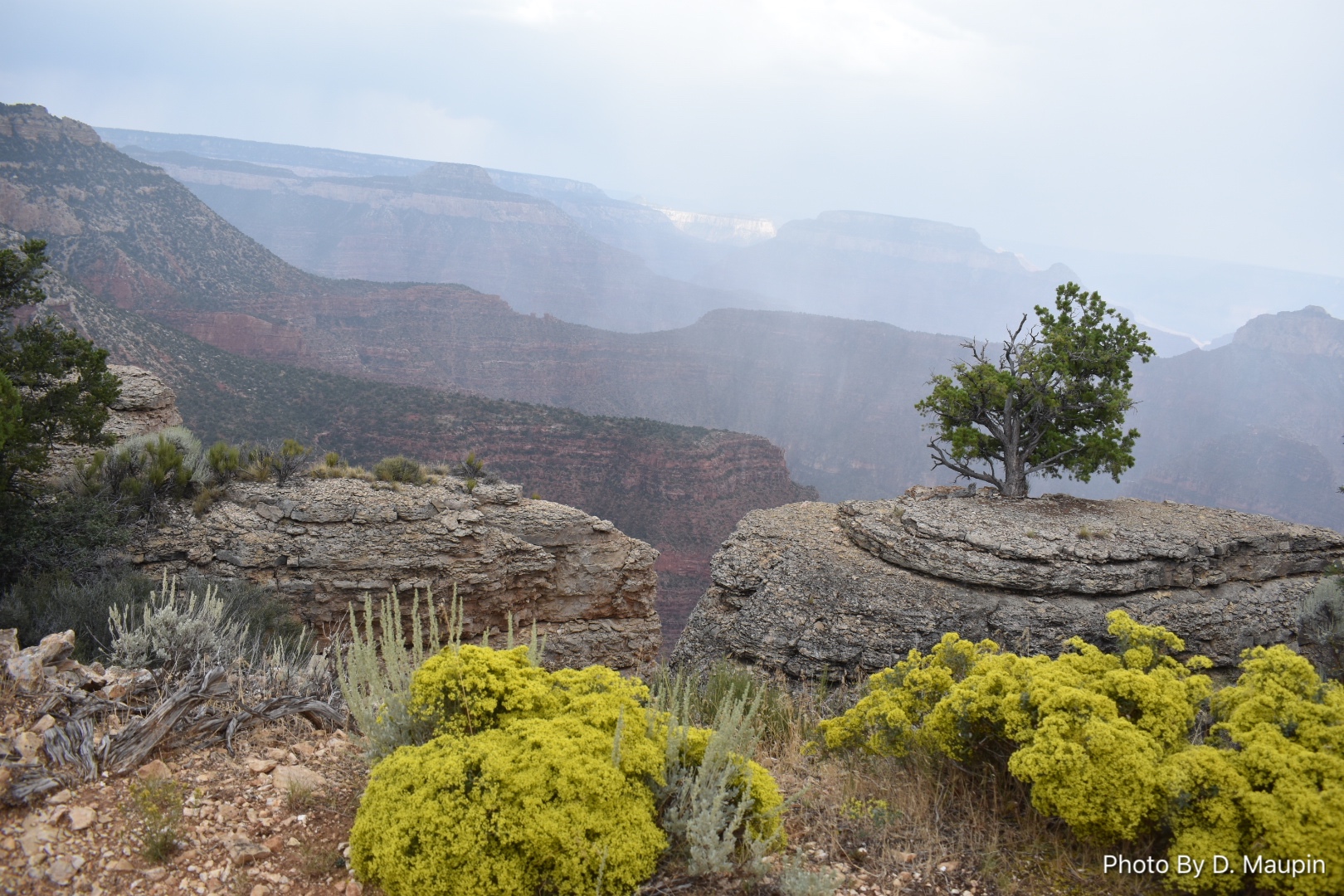 It’s been about a month since our grandson, Logan last updated the blog and returned home to St. Louis (and we miss him).  Our time spent with Logan was great!  He kept us going and we did things with him that we probably wouldn’t have done on our own (i.e., whitewater rafting and kayaking).  We are very thankful that a boy of his age (16) would even consider traveling and putting up with us for two months. I am even more surprised at how well he took to updating the blog with our daily adventures.  Thank you, Logan, for coming with us on our summer trip and for all that you contributed!  We love you!

After Logan’s flight left Flagstaff we headed back to the North Rim Campground to continue serving our volunteer assignment as camp hosts.  Have I mentioned that we just love this place?!  Our coach is set up on the same site as last year and so we feel cozy and right at home.  We were asked to return this season by last year’s volunteer coordinator and were given the opportunity to invite a partner volunteer couple to work with here.  When Robin and Jerry Lampe said they couldn’t commit to it, we thought of Tom and Kathleen Anderson and they accepted the offer.  So, here we all are working together.  This year, though, we are working with staff who weren’t here last year and our responsibilities are slightly different than last year, too.

In August, we worked three days a week and managed to do a little hiking.  Because we are leaving earlier than originally planned (doctor visits in STL), we are working four day weeks this month.  We have had some good monsoon rains here, and more rain is in the forecast for the next few days.  Don’t get me wrong… the rain we are getting is nothing compared to Hurricane Irma and our thoughts and prayers are with those affected!

This week we finally got to check an item off our North Rim bucket list.  With permission, we took the government truck and drove out to Point Sublime.  Wow, what a bumpy ride!  From the entrance of the National Park we drove through the Kaibab Forest on rough, nearly impassable, gravel and dirt service roads.  We had switchbacks, uphills, downhills, ruts that were deeper than the tires, and boulders to navigate our way through and around.  All the way there, we kept in mind that we had to make our way out of there and the truck is not a four-wheel drive.  That 42 miles took us between two-and-a-half and three hours.  Along the way we saw a vehicle coming toward us so we moved as far to the left as we could so they could pass on our right.  It was then that we realized that this was a couple from the campground that Ken had met and helped with their camper on two occasions (Landry Wyoming).  In our brief encounter, they reassured us that we were on the right path with only seven miles to go.  Shortly thereafter, we stayed to the right when we came to a fork in the road, then after a mile or so, Ken decided he should have gone to the left so he made a three-point turn around.  Luckily, before we got back to the “Y” another vehicle approached us and Ken asked if he had been to Point Sublime.  The guy said, “No, it’s four miles that way.” — which of course, was the direction we were previously going in!  So, again we turned around.  Finally we made it to Point Sublime and let me tell you that it was worth the long, bumpy, uncertain ride!  It is just a stunning place to behold.  Unfortunately, it started to rain just as we arrived. I grabbed the camera and we jumped out of the truck to take a look around.  We knew the rain would cause us big problems on those roads, so our visit had to be a short one.  Once back in the truck, we started our journey down, around, and out of the Forest.  It seemed like forever before we reached the first of the main gravel service roads, and luckily the rain was brief and didn’t cause us any problems.  We got all the way back to Forest Service Road 22 (near paved Hwy. 67) and I looked toward the Park’s entrance (four miles away) and saw a dark sky.  We drove the 16 miles back to the Campground where it had been raining hard all afternoon.  That’s when we learned that Tom and Kathleen were worried that we might be stuck in the rain somewhere on our trip and had called on Bob and Lori who had mapped out the route for us.  Thankfully, Bob and Lori were confident that everything was fine and suggested they wait before calling a search and rescue.  All-in-all, it was a solid five hour adventure and I’m so glad we did it!  Not glad, of course, that Tom and Kathleen worried about us.

Here we are at just over the halfway point in our assignment with only three weeks to go and I think we have seen just about all that we planned, except we are hoping to hike all of the 9.6 mile roundtrip Widforss Trail next week.  While we are content to stay above the rim, we are truly amazed by those who come here to hike Rim to Rim… Kudos to those hikers!

Well, I’ve kept you long enough with my tales of Point Sublime and our current status.  Until next time, we wish you all the best.  For those in Irma’s path, stay safe and don’t worry about things that can be replaced.